Entering the hex code for Myrtle Green into Photoshop is definitely easier than trying to mix the colour with the available ones in my colour palette mainly consisting of Yellow, Cyan and Magenta.

Unlike what I expected, I do like the simplicity of the outcome of this one.

But, this will be my last #colour_collective contribution for 2015.

Every artist needs a break now and then in order to ‘fill the well’ – as Julia Cameron in her book *’The Artist’s Way’ puts it so nicely – so now it is time to fill mine.

And, in case you are still looking for Christmas presents, I’ve just set up a teeny tiny shop at Society6 with currently two of my works: available are prints of my blue/yellow ‘French bulldog‘ painting (acrylic on canvas) and ‘Fascination‘ painting (water-colour on mixed media paper).

Link to the shop: http://www.society6.com/babybluesnowflake

Last but not least, a huge big thank you to all my followers and visitors to this blog for viewing, liking, commenting on and sharing my artwork. Your support and encouragement is very much appreciated and I plan to be back with a lot more **’one baby step at a time’.

May you all experience a Merry Christmas and a Happy New Year!

**quoted from the book ‘The Artist’s Way’.

For this evening’s #colour_collective colour Silver, I was inspired by the current silvery sky and the first few snowflakes that silently floated down onto the streets a few days back. 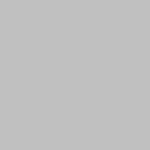 There is something quite magical about first snow.

I have observed myself and others returning to a childlike state of being when these leight-weighted, celestial dancers manifest from the sky.

Any thoughts that might have been troubling the mind fade away in admiration of these architectural miracles.

In their presence, time seems to stand still and – even if just for a mere moment – much of the ongoing chatter within the mind simply ceases.

Next week’s colour for #colour_collective is yet to be announced.

Wishing all a lovely and mind-chatter free weekend!

Today’s monster was a vampire.

Vampires are not really something I would choose to draw by my own initiative.

But leaving ones comfort zone once in a while does not hurt.

Because I was not satisfied with the results of my first inked drawing ‘Vampire’, I decided to do another called: ‘Vampire Costume’ hoping the results would satisfy me more – meh.

So here is vampire number one:

And here is the cutesy version vampire number two:

Personally, vampires and zombies both bore me to death.

All the hype around the portrayal of vampires and zombies in books, films and series of the past few years is something I cannot relate to and is a trend I most certainly have not been following.

But I must admit, there was one:

The first and last book about vampires I read was ‘Salem’s lot’ by Stephen King.

I had received the book from my aunty with no idea that I would be dealing with vampires.

As it became clear, I was already too deep into the story to put the book down.

I did like the book. But, at the same time, it did not motivate me to pursue reading further vampire stories.

Last Friday’s #colour_collective colour Dark Sky Blue reminded me of cold Winter days in the snowy mountains and this is exactly where I took the scene:

Although Autumn has become a little more mild in temperature as of late, the previous days did give a strong reminder that Winter is really just around the corner.

Being accustomed to subtropical climate, Winter can be hard on me.

But, I have found a way to overcome Winter blues by escaping to above cloud and fog level to the mountain tops.

Activity in fresh air activates circulation, the sun’s rays support vitamin D production and uplift the spirit too, and the high amount of negative ions in the snow and mountains neutralise the body’s energy field.

Not only fun, but also the ultimate immune system boost, I’d say.

Next week’s colour for #colour_collective is Apricot.

Any theme, any medium, anyone. Post together Fri 19:30 GMT+1. Just use the #colour_collective hashtag on Twitter. For more information see @Clr_Collective and @PennyNevilleLee (#colour_collective creator) and do check out the wonderful illustrations that were posted so far.

Wishing all a lovely Saturday evening, relaxed Sunday and great start into a wonderful week!

For last Friday’s #colour_collective colour Russian Violet, I decided to do a sequel of the museum scene.

I used gouache for the Rothko inspired ‘expressionist museum painting’ as the colours are more opaque and intense than watercolours. 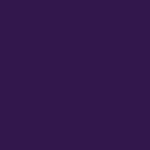 Violet was never really a favoured colour of mine, quite to the contrary.

It is a colour I still prefer to avoid. However, meanwhile I do feel differently with other Violet shades like Lavender, Lilac or any type of Violet that has a lot of Red in it.

Some time ago, I had a coat in Violet that I mainly bought for the multi-coloured lining in Orange, Yellow, and Green squared shapes. I adored the lining!

Teamed with say, a strong green or red shawl I was able to make it work for me and made my peace with the coat’s colour.

So coming up with a theme for this #colour_collective colour was a challenge as even thinking about it made me feel rather dull and tired too – or wait – maybe it was really just due to another overly action packed week!

Next week’s colour for #colour_collective is Indian Red 🙂

Wishing all a lovely week ahead!

May all the beings in all the worlds be happy!

For last Friday’s #colour_collective colour Cadmium Yellow I decided to create a scene in a museum.

I used gouache for the two ‘museum paintings’ as the colours were brighter and more opaque and intense than watercolours:

Next week’s colour for #colour_collective is Russian Violet – this will be an interesting week!

Wishing all a lovely Sunday!

First Love with a pinch of Rose Tyrien for last Friday’s #colour_collective.

Upon researching Rose Tyrien, one of the first things to find online was the Hermès Birkin bag from the 2011 Spring/Summer Candy Bi-Colored Collection.

Viewing images where the Rose Tryien Birkin is placed next to a Hermès Orange packaging not only reminded me of how Yves Saint Laurent also liked to use these rich colours in combination, but it also took me on a mental journey to India, the queen of vibrant colour combinations.

I do adore combinations such as Orange/HotPink as well as Peacock Blue/Emerald Green or maybe even Emerald/HotPink – all teamed with Gold, of course.

Next week’s colour for #colour_collective is Cadmium Yellow.

Wishing all a lovely Sunday and a good start into the week!

For last night’s #colour_collective colour Phthalo Blue another beach scene – but at night and around a campfire:

This time, I actually had Phthalo Blue available as such.

Nonetheless, I was sticking to Phthalo Blue and in those few locations where water and pigment gathered together on paper in greater intensity, the digital reference and the watercolour Phthalo Blue I used drew near in likeness.

Next week’s colour for #colour_collective is Duck Egg Green. Hm, let’s see if I’ll manage to create and illustration without ducks or eggs.

Wishing all a lovely weekend!

Tea Rose is such a delicate and soft colour.

So, originally, I had planned to do a bedtime theme.

You know, a cute room, lovely bed with Tea Rose coloured bed sheets, the kids all comfy on or beside the bed as well as Archie and Medes all snuggled up in the sheets.

But then again, with nature supplying so many magnificent colour combinations at dusk and dawn – including Tea Rose – I could not mentally lock myself  indoors and took the scene outside.

Interestingly, upon completion, it felt indeed like I spent a wonderful day at the beach.

Next week’s colour for #colour_collective is Phthalo Blue.

Wishing all a lovely weekend!

selection of past works 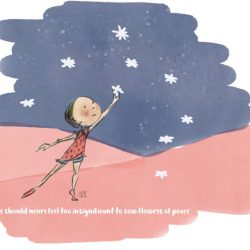 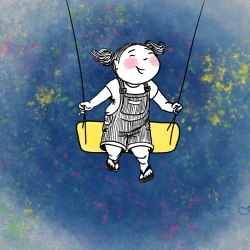 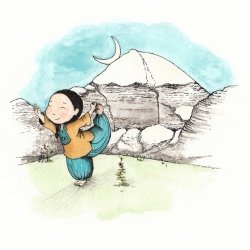 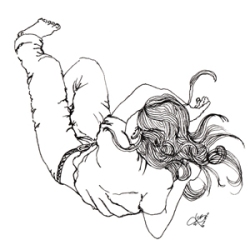 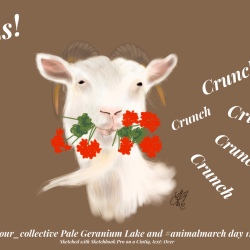 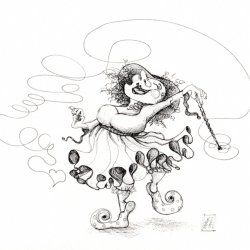 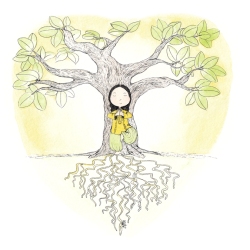